Guardian of the Peloponnese | A guide to Acrocorinth

Beyond the gaping rift, surgically cut into the bedrock of the narrow Isthmus of Corinth, massive scarps rise above the argentine crowns of olive trees and verdant rows of vine stocks. Stoic and vigilant, the mountain has watched over this critical junction for millennia, and its intimidating presence has demanded veneration from those who wished to set foot on the Peloponnese.

Despite its daunting appearance, countless people have embraced the ruggedness of its forbidding terrain, adapting it to their needs, while bitterly fighting for its strategic worth.

From the Greeks to the Romans and the Franks to the Ottomans, all played their due part in the fortress’ multifaceted tale. From Acrocorinth’s inception onwards, ambitious generals and noblemen alike wagered their life on these rocky slopes, in hopes of conquering the precious peak and planting their banner on the citadel’s crenelations. Those who claimed dominion over its summit not only held sway over the peninsula’s solitary land access but controlled both terrestrial and maritime trade routes, promising prestige, wealth, and power.

Although its glory days have passed, the remnants of its once formidable fortifications allow a fleeting glimpse into a time when Acrocorinth, in all its might, truly was the guardian of the Peloponnese 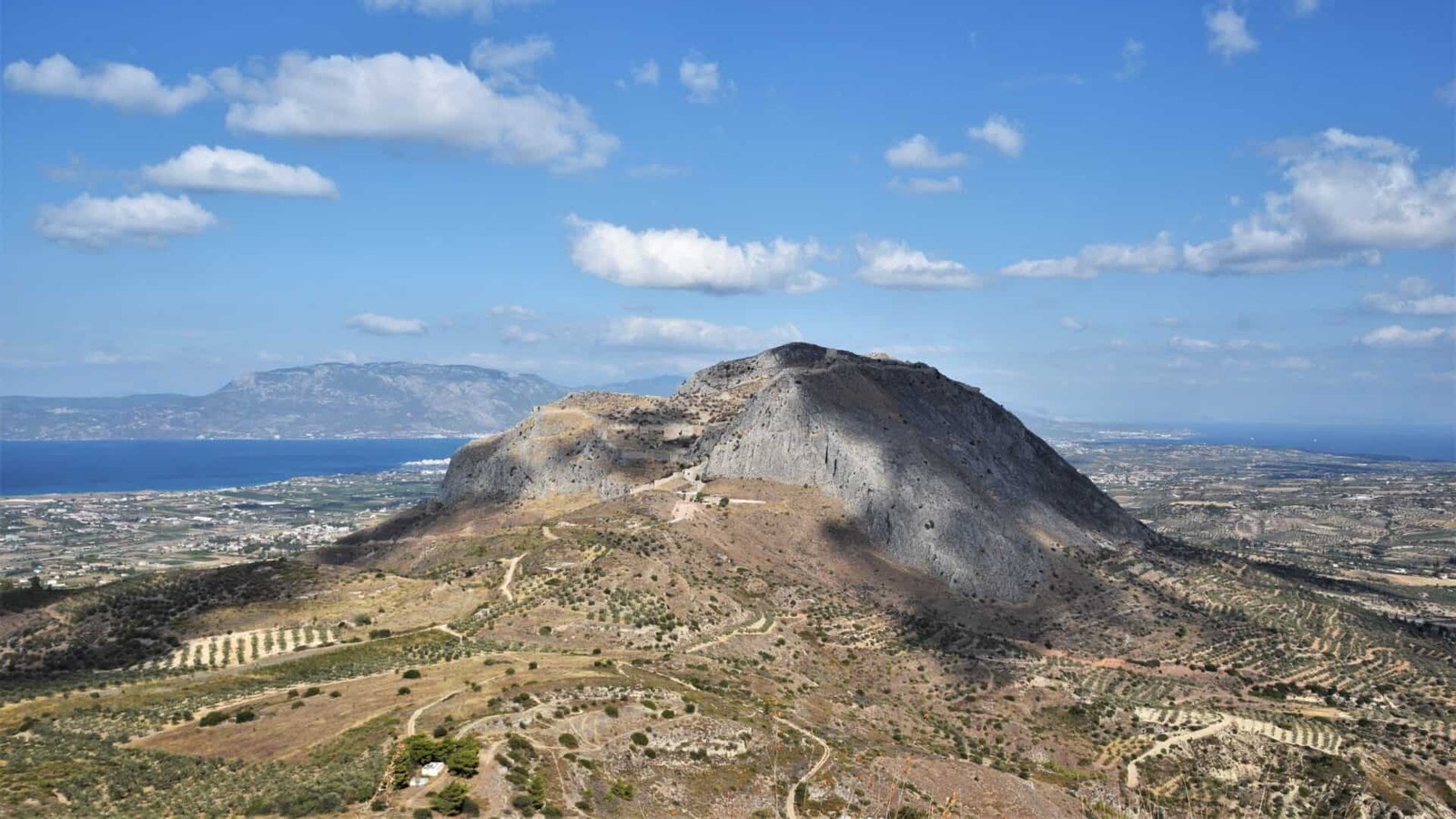 Today, Acrocorinth’s storied past is best visible in the diversity of its remaining structures. As you step through each one of its three impressive gates further buildings will reveal themselves, hinting at the numerous people that have ruled over this millennium-old fortress.

The blue and white flag of the Hellenic Republic may fly proudly but merely represents a single chapter in the citadel’s eventful history. Byzantine chapels, Turkish mosques, Frankish fortifications, and Venetian bastions tell the entire tale, filling up the rest of the book.

Even though most structures lie in ruins, three buildings deserve a closer look.

The Temple of Aphrodite

In ancient times, a lavishly decorated sanctuary would have graced the highest peak of the castle complex. Devoted to Aphrodite, the city’s guardian deity and goddess of love, beauty, and pleasure, it is said that hundreds of courtesans were not only dedicated to the worship of the goddess but also engaged in temple prostitution, attracting visitors from all corners of the Hellenic World. Scholars today, however, are sceptical, concerning the historical accuracy of these accounts or whether this divine debauchery even occurred in the first place.

Although, this temple of ethereal lust has not survived the ages, and the only remnants visible today stem from a Byzantine church built in the 5th century CE, a visit is still worthwhile.

Head up there to enjoy an epic 360° panorama of the Isthmus of Corinth and the olive grove covered slopes and plains sprawling below! 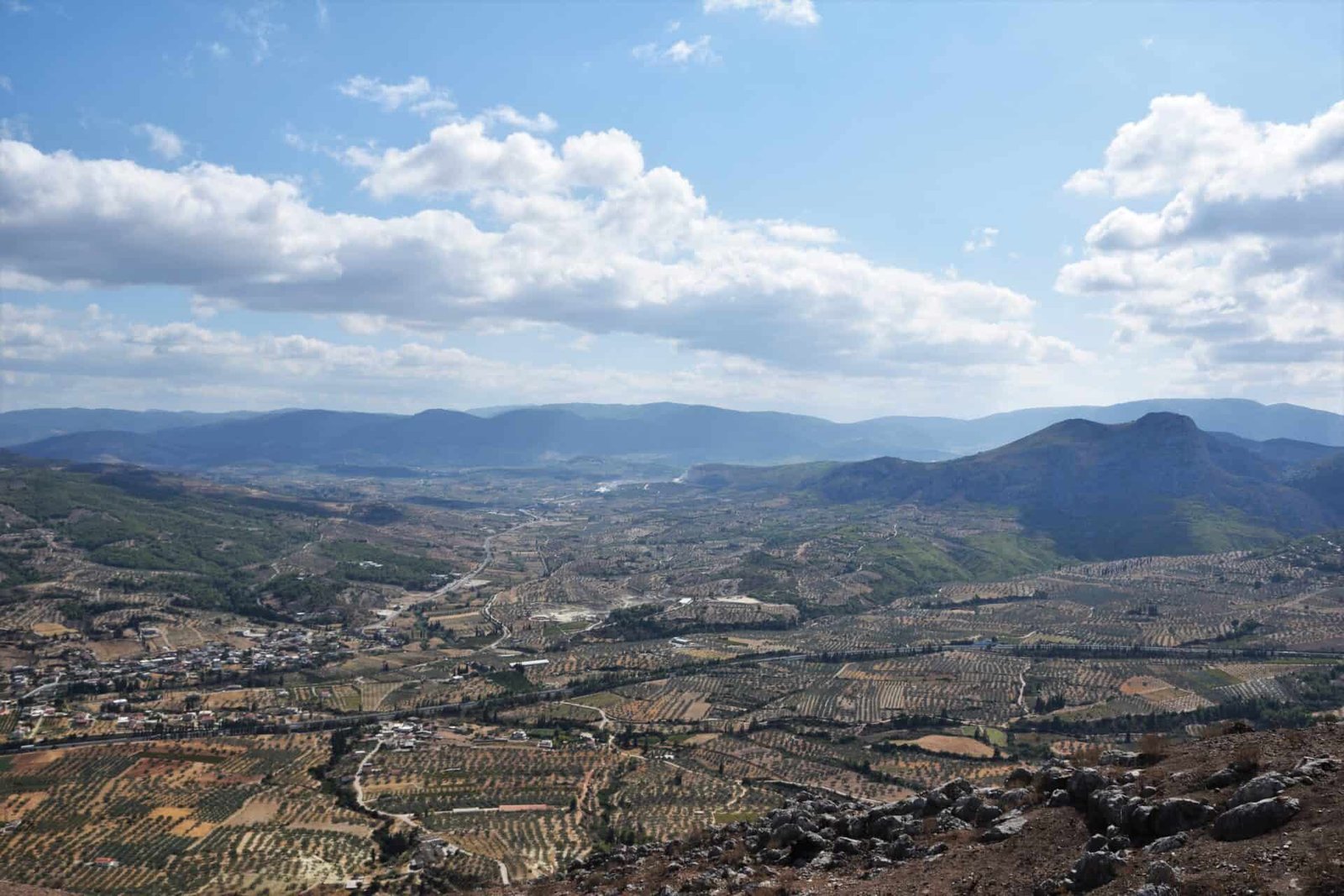 At the far end of the complex lies the mythical Upper Peirene Spring.

According to the Greek traveler Pausanias, the spring was a gift to the city’s founder Sisyphus by the river god Asopus (the same Sisyphus, who cheated death not once but twice, and who was subsequently punished by Zeus for his hybris by having to roll a boulder up a hill for eternity). Sisyphus had witnessed the ravishment of Aegina, daughter of Asopus, by the Greek Allfather Zeus himself, but refused to reveal the unsettling truth before he was given a spring in Acrocorinth. Asopus obliged and Zeus’ identity was unbosomed. Sisyphus was therefore sent to Hades to suffer but successfully escaped his fate for the first time.

The spring also played a crucial part in another tale. Tasked with the slaying of the Chimaera, a hellish, fire-breathing beast terrorizing the countryside of Lycia, the ancient hero Bellerophon was warned that he was in need of the winged steed Pegasus for this endeavour. Aided by the goddess Athena and the Corinthian seer Polyeidos, Bellerophon managed to capture the unsuspecting horse, while it drank from Peirene, ultimately allowing him to vanquish the vile monster.

The cisterns can be entered via a narrow staircase leading into the ground, and it is rumoured that the spring never dries up. 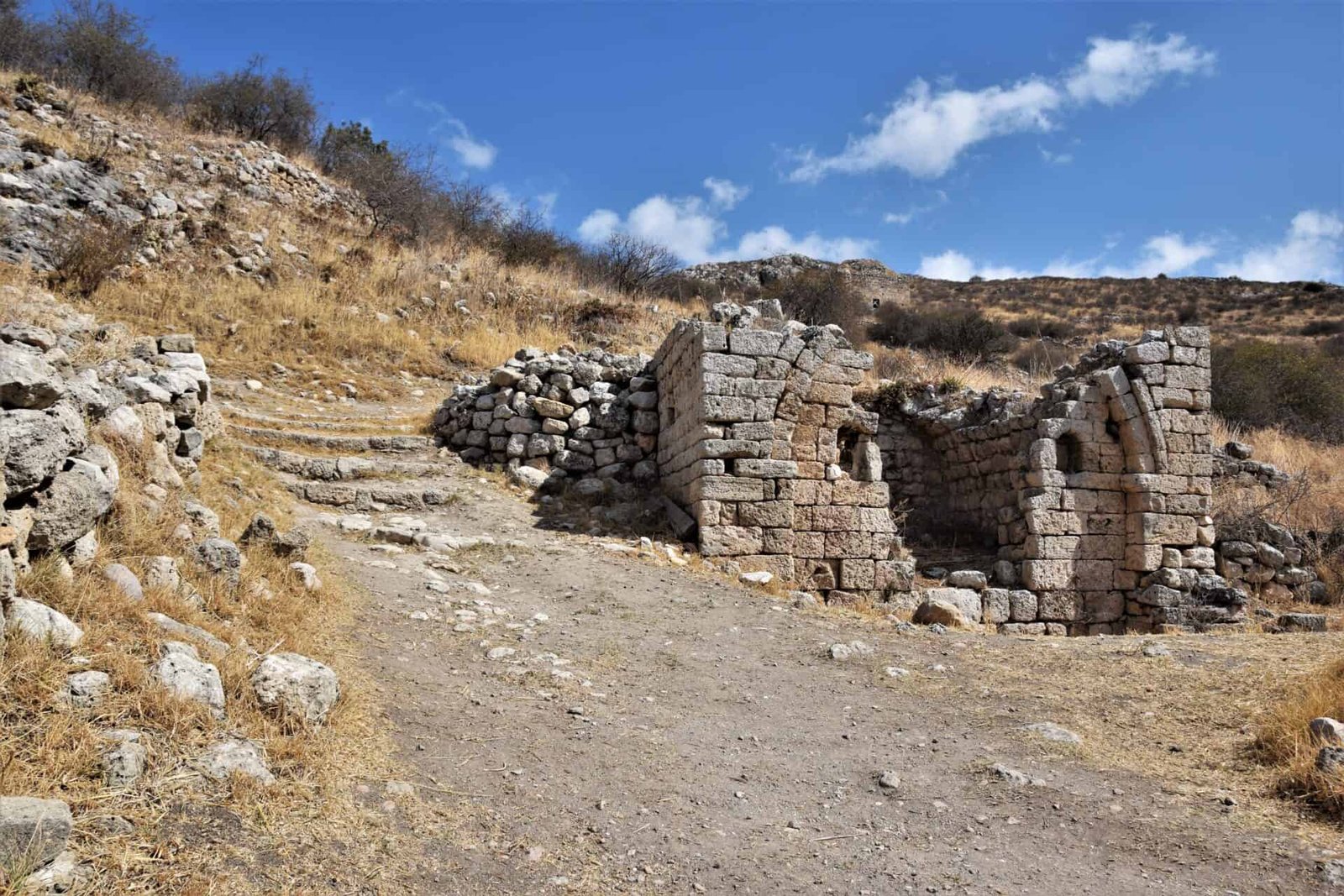 Besides the three colossal gates, the Frankish Tower is the most prominent structure in Acrocorinth. Perched on top of the smaller of the citadels two peaks, it keeps watch over the surrounding countryside.

The exact date of its construction has been lost but is assumed to have happened at some time between the 13th and 14th century, following the failed 4th crusade and the Frankish occupation of Greece.

As you walk past the skeletal remains of charred shrubs jutting out of blackened soil to reach the keep, the destructive reality of Greek summers will provide a stark contrast to the fertile plains below. 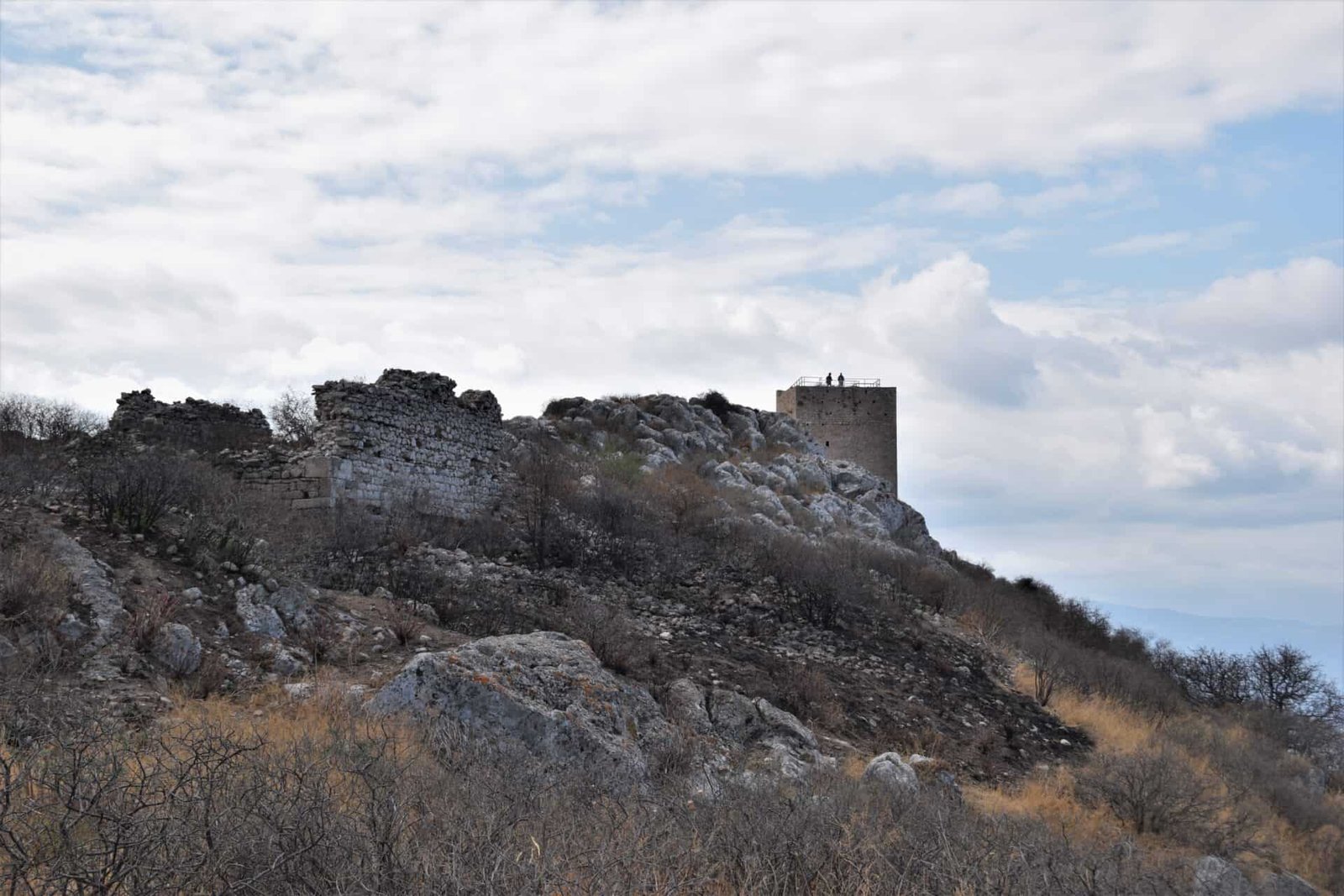 As of October 2021, visiting the site is completely free, however, a new road is being built, which suggests that the Greek government seeks to tap into the touristic potential of Acrocorinth once the pandemic ebbs away.

The site is extremely vast and extensive so calculate at least 2-3 hours if you want to see most of it.

Oh, and did I mention the views? Seriously, Acrocorinth has all the views, so even if you aren’t interested in the history, simply come to indulge in this panoramic excess alone! 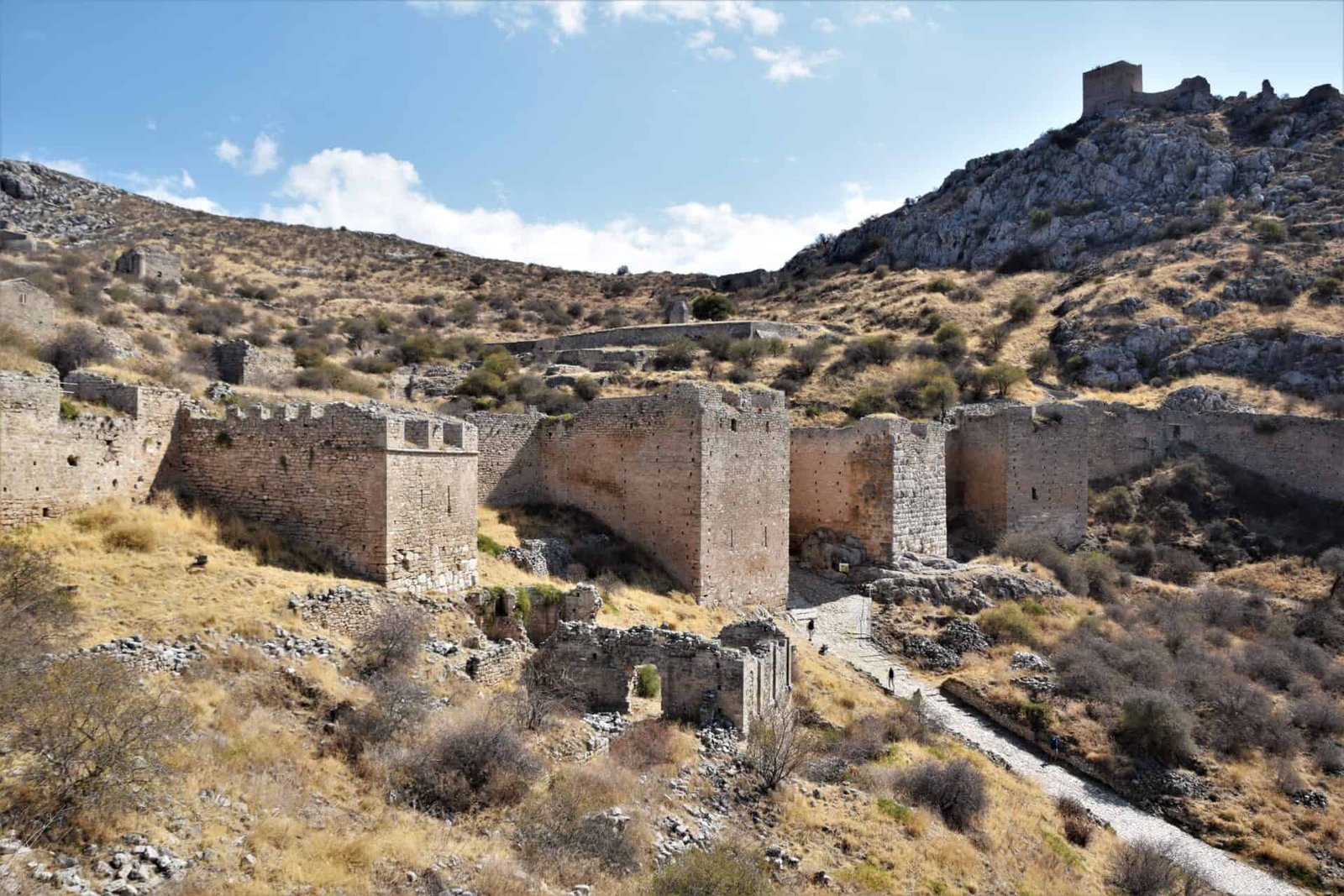 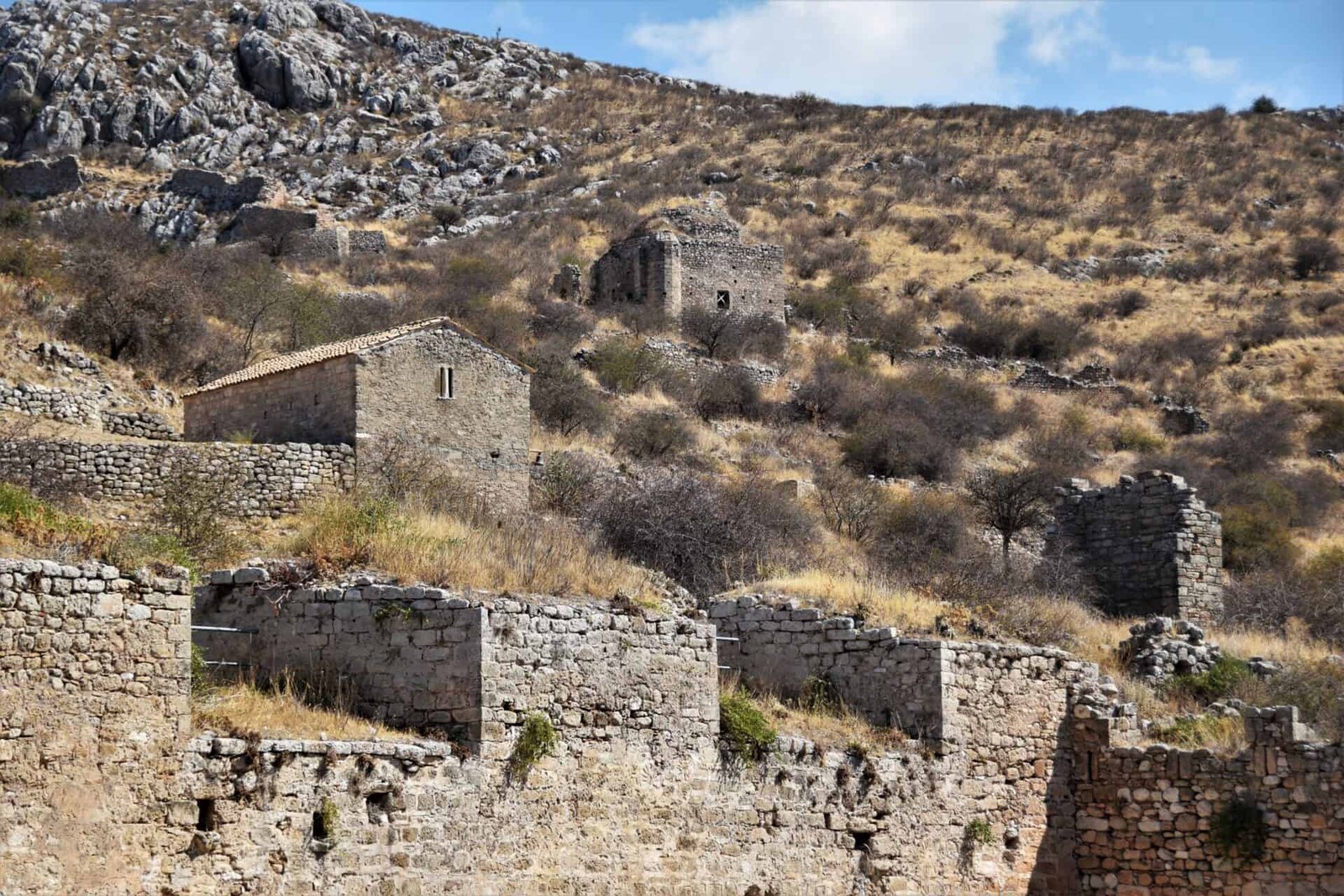 Located on the dry foothills of the jagged mountain of Acrocorinth, lie the excavated ruins of Ancient Corinth. According to legend, the city was founded under the name Efyra by the aforementioned Sisyphus, yet it is unknown when Corinth truly established itself as a unified polis (= city state).

Beginning in the 8th century BCE, Corinth entered an age of economic and cultural prosperity, tightly connected with the political ascendance of the Bakkhiadai family and the foundation of colonies in both Corcyra and Syracuse, emerging as one of the three most powerful poleis in Greece (after Athens and Sparta). Following its participation in the Persian Wars against the expanding Achaemenid Empire, inner-Greek conflicts and a growing commercial rivalry with the Athenians heralded the decline of this once magnificent city.

In 146 BCE, it was the Romans, however, who brought doom upon the polis. The legions of the Republic were merciless, and Corinth was razed to the ground, its riches plundered, and those, who were “lucky” enough to survive the slaughter, sold into slavery. Even though, Caesar successfully re-established Corinth as the provincial capital of Greece a century later, the city never fully regained its former glory. 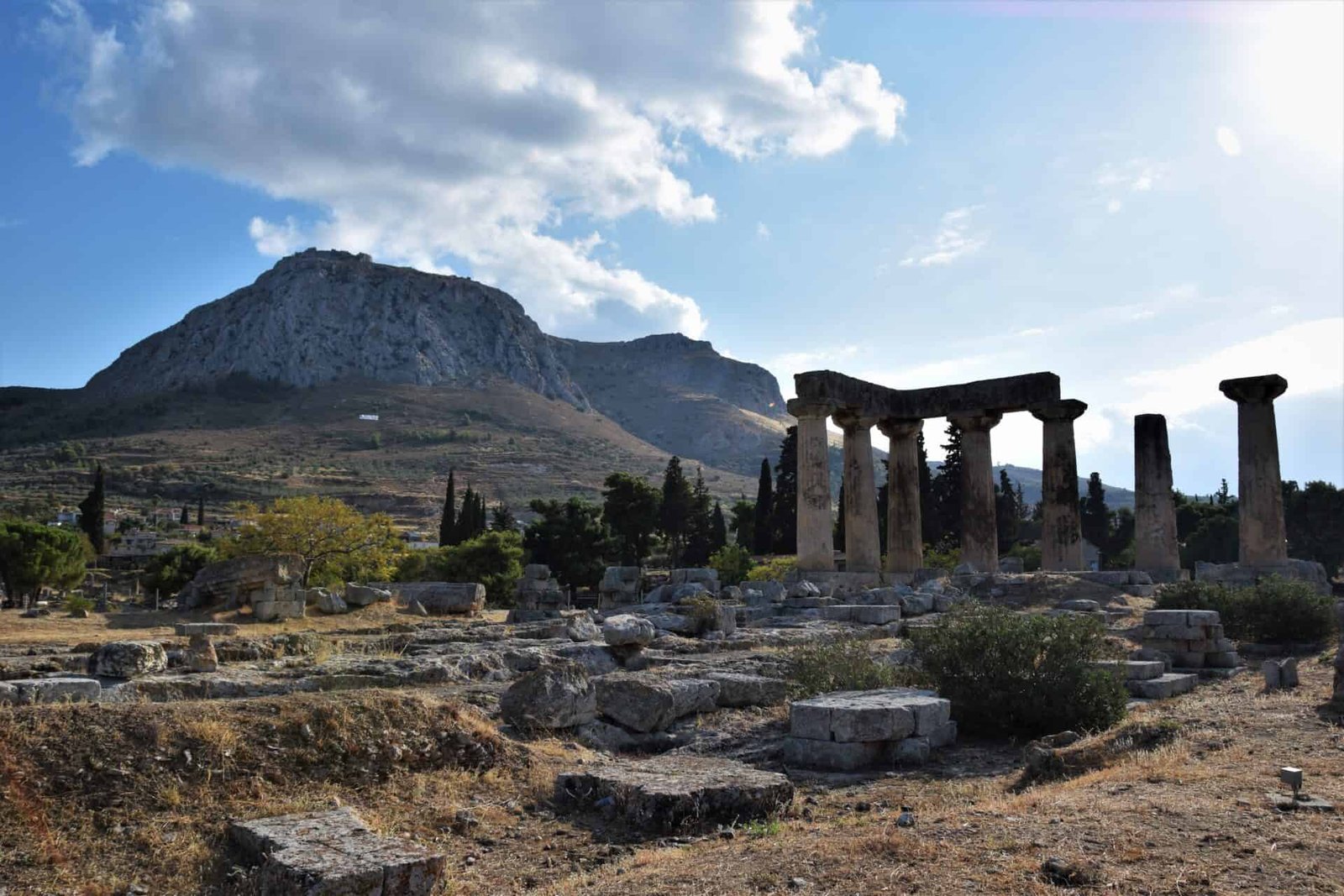 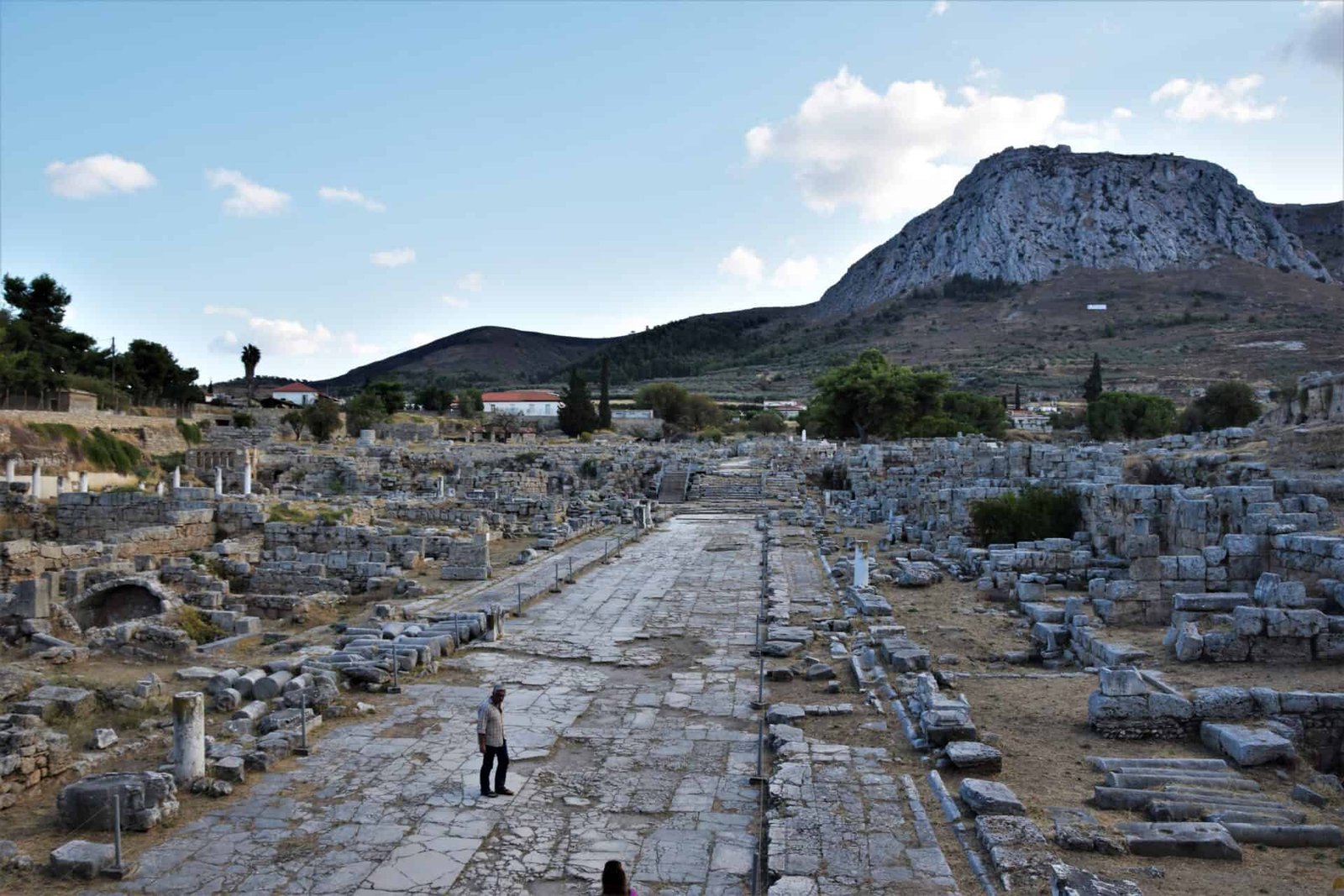 Although, the archaeological park is smaller than expected, the excavated remains presage the wealth and prestige Corinth once had. The enormous, colonnaded temple of Apollo, proudly sitting on a hill, still constitutes the heart of the city. It is surrounded by further sanctuaries, public buildings, the agora, fountains (including the Lower Peirene Spring), and the theatre, indicative of the cultural and commercial significance of Corinth.

On the premiss, visitors will also find the Archaeological Museum of Corinth containing the rich findings unearthed in the area, including pottery (Greek, Roman, and Byzantine), beautiful murals, elaborate floor mosaics, and marble statues of Roman rulers. 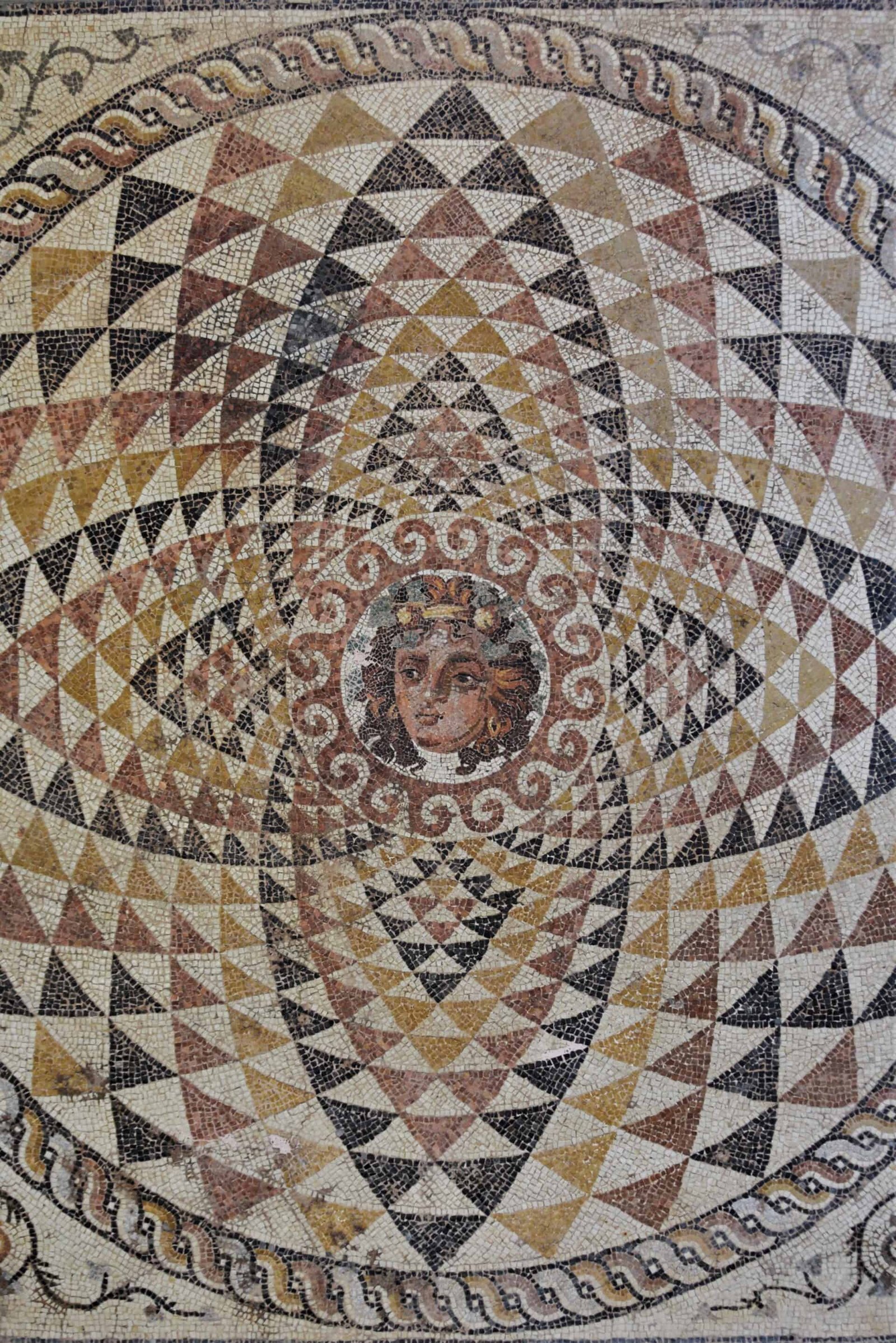 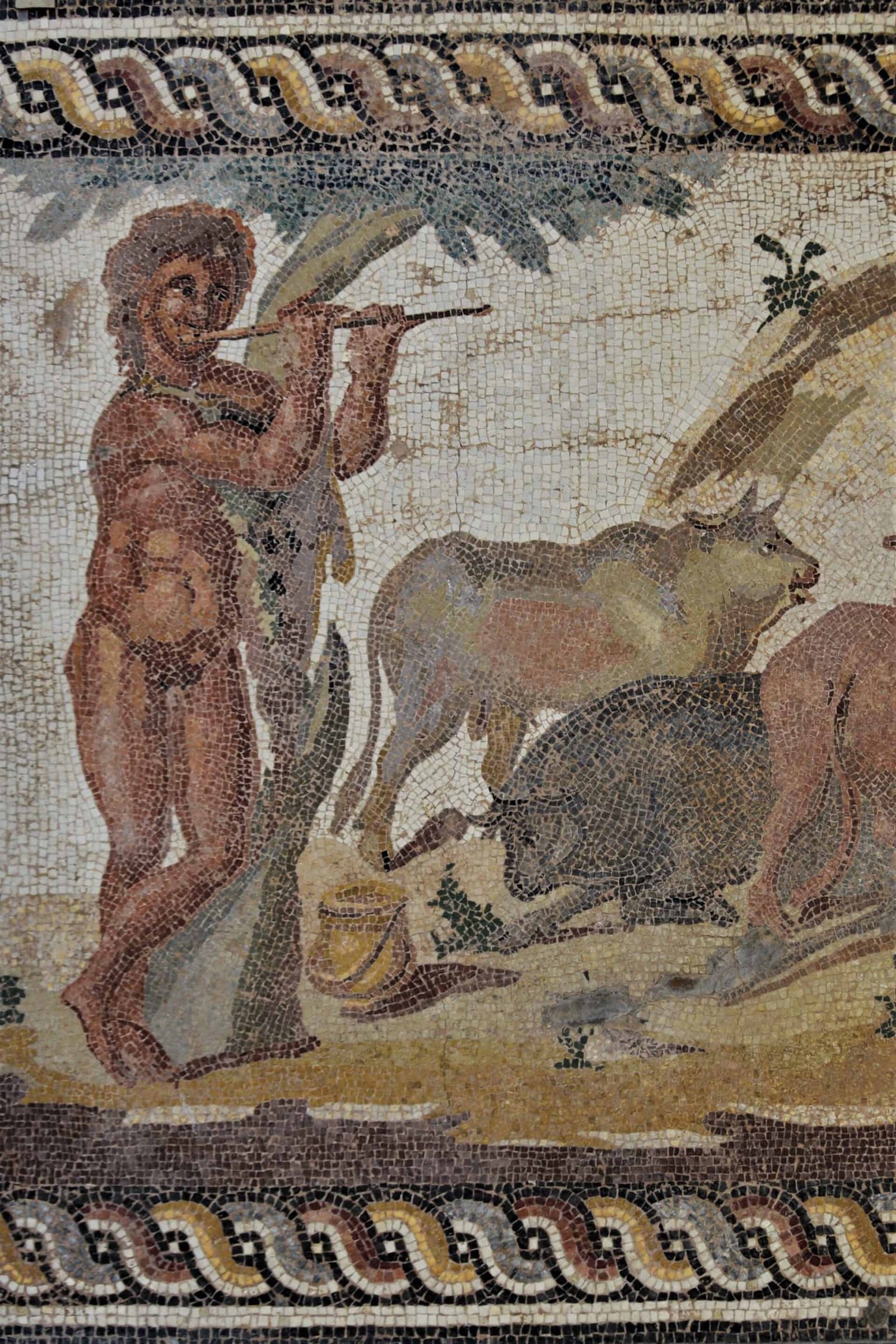 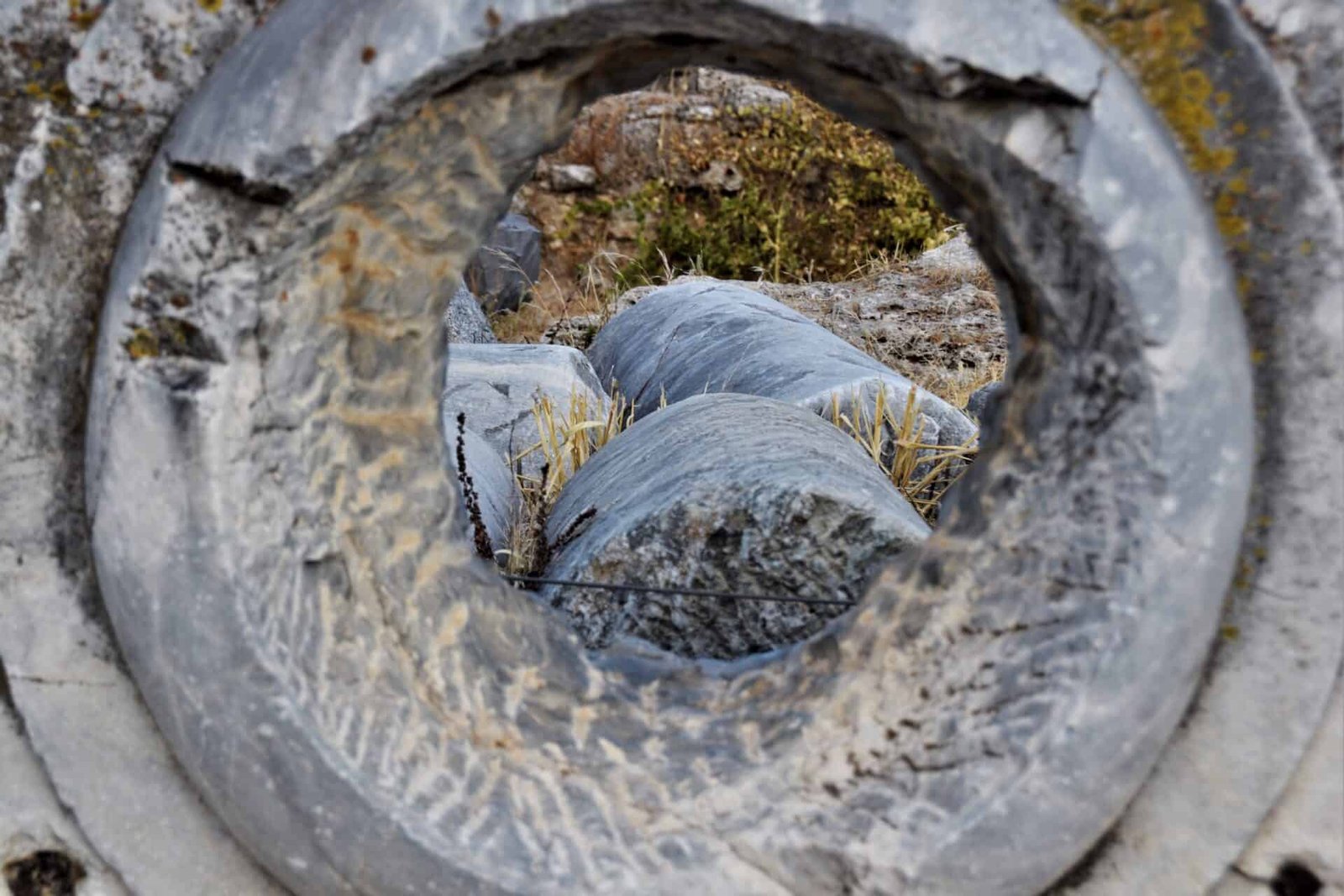 On a pyramid-shaped outcrop, roughly 1 ½ kilometres opposite the citadel’s main entrance, lie the ruins of another castle.

Besides the foundations of a tower, and a couple additional rooms, not much is left of the former Frankish fortification, however.

While a mere visit to the ruins is definitely not worth the climb, the hill offers excellent views (and photo opportunities) of the table mountain and Acrocorinth’s impressive walls, perfectly blocking off the only side of the castle not protected by the precipitous terrain. 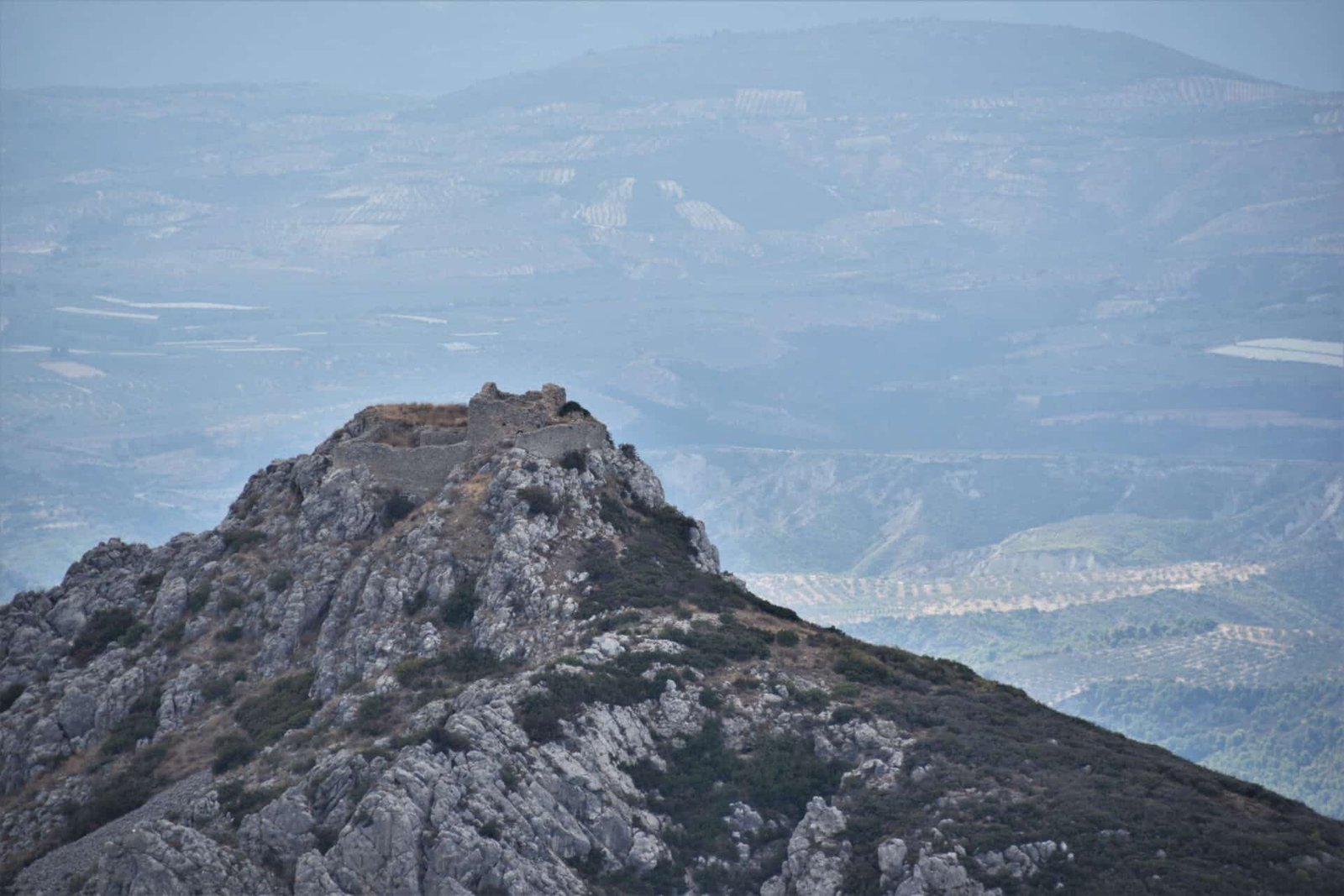 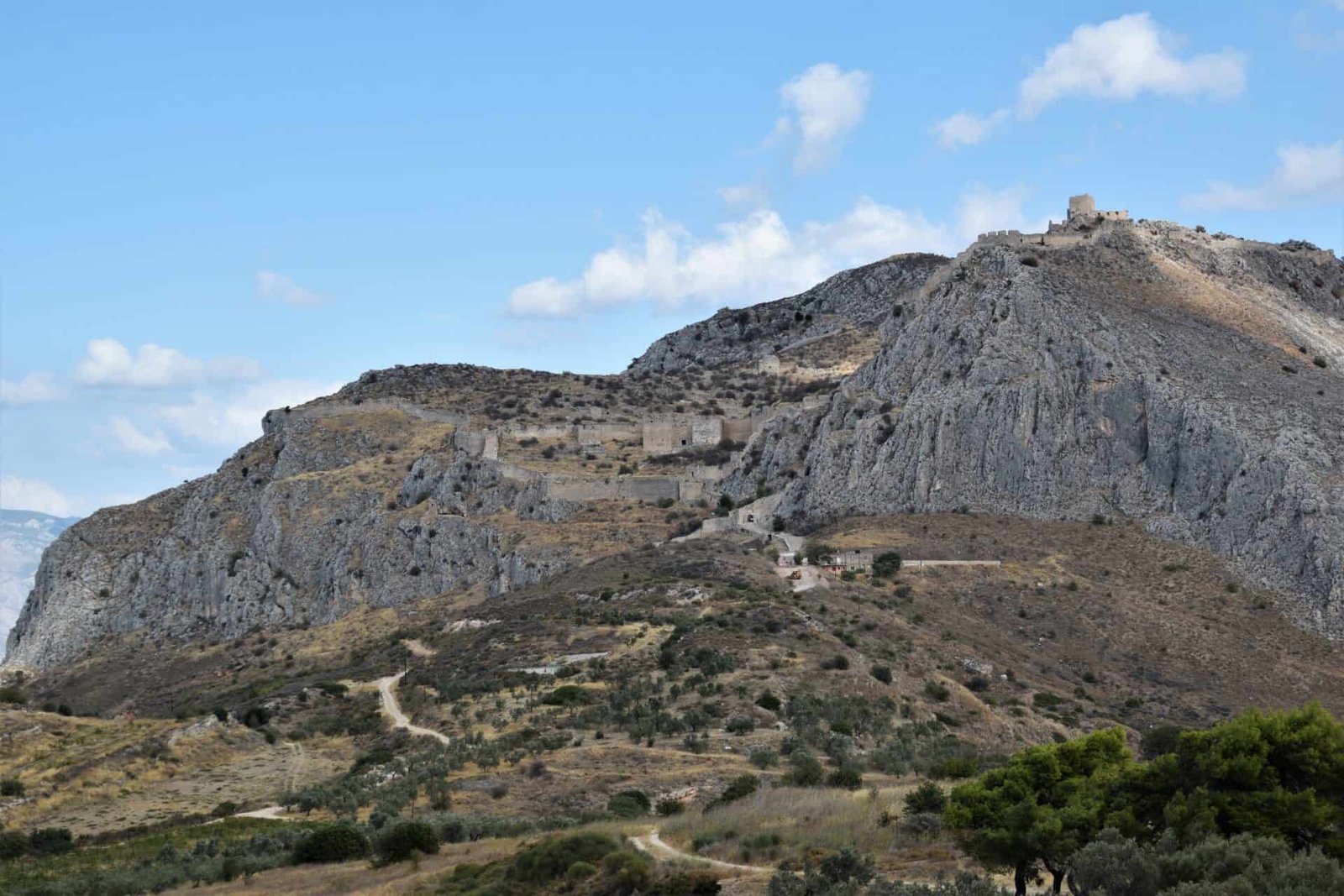 HOW TO GET THERE (without a car)

There are daily buses running from Corinth’s main bus station, located across the street of the old train station, to the archaeological park of Ancient Corinth.

Since there are no buses going directly to the citadel of Acrocorinth, you have two options:

Should you choose the second option, simply follow the brown signs directing you to the castle. There is a single road running along the northern side of the table mountain, leading you to the main entrance, so it should be impossible to get lost. If you have the scarps on your left-hand side, you’re on the right track!

It will take roughly an hour (3,5km) to reach Acrocorinth. The sun will scorch you the whole way up, so make sure to bring enough water and a headgear, especially if you visit in summer!

The bus back to Corinth leaves from the same stop (near the site of Ancient Corinth) the driver will have dropped you off earlier. Also, don’t forget to ask for the last bus, since they do not run regularly (at least during shoulder and off season)!

Enjoyed it? Pin it for later! Is completely captivated by countries most people stay away from. Survived a shipwreck and jumped out of a metal cage suspended 120 metres above ground, once. Failed miserably to learn salsa in Colombia, probably because he spent too much time in mosh pits.

Erected by Cyclops | Remnants of the Mycenaean civilization

5 wonderful hikes to experience in the Vikos-Aoos National Park

This site uses Akismet to reduce spam. Learn how your comment data is processed.

This website uses cookies to improve your experience. We'll assume you're ok with this, but you can opt-out if you wish. Accept Read More